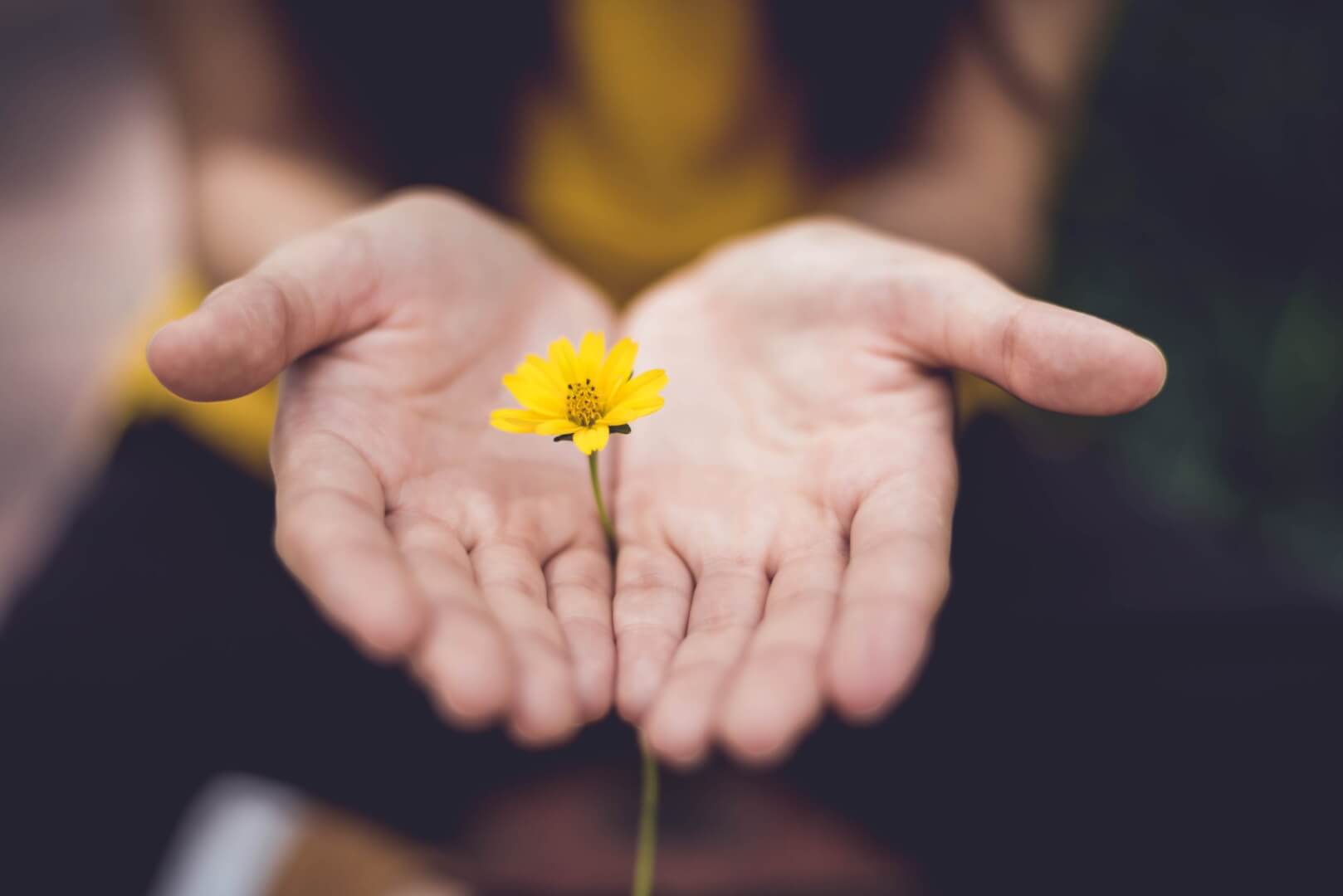 Read about how the Salvation Army increased giver engagement and the number of email addresses by 29%. Also, discover the…

Read about how the Salvation Army increased giver engagement and the number of email addresses by 29%. Also, discover the insight that changed the way they communicate with their givers.

Challange of the Salvation Army: To renew and digitalize

The Salvation Army is present in more than 130 countries. They conduct parish activities and various past open social work. Social work is aimed at different target groups and it can be efforts for children, young people, homeless, unemployed, women’s groups, the elderly and addicts.

The Salvation Army in Sweden has a turnover of SEK 667 million. Revenues came mainly from gifts and wills, collaborations, profits from the Ants and property management.

This customer case focuses on how the Salvation Army works to increase revenue through gifts. To do this, the focus has been on reaching a new target group and increasing the commitment of current donors.

Here were some of the challenges:

1. To communicate via digital channels.

To create commitment modern ways of reaching out, engaging and informing are required. Everything points to the fact that the Salvation Army’s target group wants a more digitized experience. For example, digital donation 2018 Prize doubled with 2017.

2. To communicate more personally and relevant to previous donors.

The Salvation Army receives several gifts from those who have given before. Therefore, it has been important to communicate relevant and personal to that target group.

3. To help donors give to specific purposes.

Through surveys, it has emerged that the Salvation Army’s target group gives more to a specific purpose than a general one. Therefore, it has been central to helping donors donate to specific causes showing vulnerable children, homelessness, loneliness, natural disasters or substance abuse treatment.

To increase engagement and revenue through gifts, the Salvation Army chose to use data and technology.

This enables a personal response and the right message arrives in the right channel at the right time.

In the upcoming section, you have the three steps the Salvation Army took to find new donors, loyalize existing donors and communicate more personally and purposefully.

The Salvation Army website has about 36,000 visitors each month. In the past, there were forms where visitors could submit their contact information, but they were not used visibly.

What the Salvation Army did to this target group, which obviously showed interest in their activities, was that: 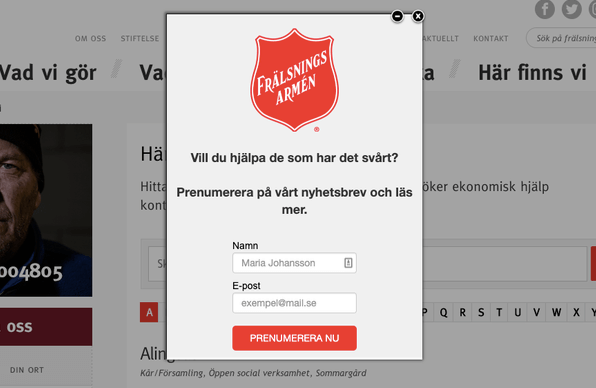 STEP 2: GET TO KNOW THE TARGET GROUP
(AND SEGMENT BY INTEREST)

Once the Salvation Army set up a process to collect leads, they chose to focus on their current donors. More specifically, they wanted to find ways to engage those who gave once and create incentives to get them to give again.

They started by creating segments based on the purpose the donor previously donated money to. By segmenting based on interest, they can send communications based on this. For example, someone who is passionate about vulnerable children or natural disasters then gets relevant communication linked to this – and is not overpowered by all communication.

STEP 3: Reach Out Over Multiple Channels

That we spend a lot of time with our mobiles and computers is nothing new. In order to be part of the donors’ everyday lives and increase their commitment, the Salvation Army chose to communicate via more channels.

Earlier, the Salvation Army only sent letters and SMS to its donors. Since they want to reach a younger target group, they have today partly personalized their communication in e-mail and SMS, and expanded the channels they reach their target group with.

In addition, various messages have begun to be tested and communicated via so-called web push. Then you also reach people who do not use e-mail, but who have nevertheless shown interest. On average, about 10% of the target group click on notifications via web push.

They also continue to send out SMS, and plan to start segmenting based on interest in order to be able to send a more relevant message based on the purpose the donor is interested in.

By collecting more leads, segmenting the donors based on interest and communicating to them in the channel they are on, they have managed to increase the commitment and interest of their donors.

THE JOURNEY TO HELP MORE, THROUGH DIGITAL RESOURCES, HAVE ONLY BEGAN.

The challenge of the Salvation Army was to reach a younger target group, to communicate more personally and to increase giving by communicating based on interest. The number of e-mail addresses has increased by 29% and donors are starting to receive interest-based communication in the channels they are on.

Data and technology should always be an aid and this is an example of how technology can help reach more people, increase commitment and ultimately – contribute to a better world.

Want to donate money to the Salvation Army? Click here. 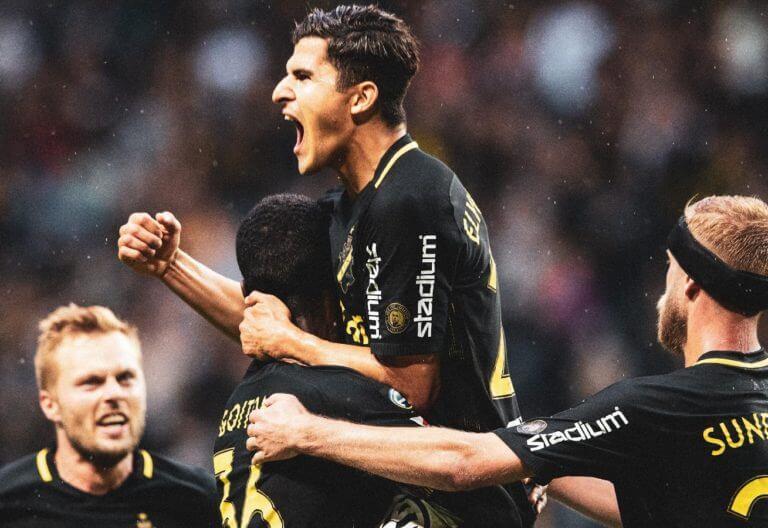 Learn how the Swedish football club AIK generated over €100 000 through a relatively simple campaign. A campaign that can… 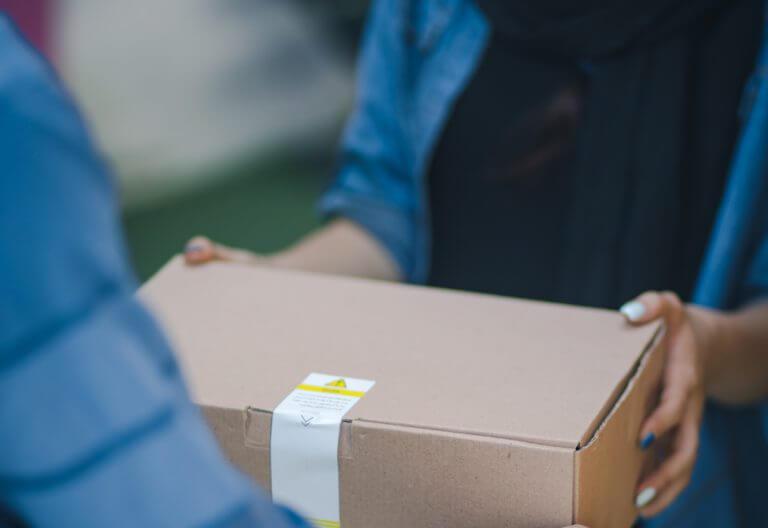 ​Discover how the moving company Kvalitetsflytt managed to double their conversion of new customers by automating their quotation management. Also,…